Xiamen, 4th July 2018 – “Create2018” Baidu AI Developer Conference was opened grandly at National Convention Center and the autonomous driving bus King Long Apolong once again became the focus of the conference. A good part was played at the opening of the conference. Under the witness of all attending distinguished guests and the media both home and abroad, Robin Li fulfilled his promise made at the Baidu World Conference in 2017 and during the channel interview of representatives of the two conferences, the mass production of King Long Apolong in 2018.

At 10 a.m., Robin Li at the speech stage contacted via video conferencing at the King Long Apolong production line site in Xiamen in south of China. He communicated to Chairman of King Long Bus Xie Siyu standing in the assembling line to hold the offline ceremony of the world’s first level L4 mass-produced autonomous driving bus King Long Apolong from both south and north of China.

Following the slow driving of the completely finished King Long Apolong from the production line, the Chairman of King Long Bus Xie Siyu solemnly declared the official offline of the 100th King Long Apolong bus. So far, it created a new record in the history of autonomous driving vehicle. At this exciting historic moment, the conference site was full of thunderous applause for a long time.

After the ceremony, these mass-produced King Long Apolong buses will be shipped to enclosed zones in Beijing, Xiong’an, Pingtan, Guangzhou, and Shenzhen for demonstration operations and will be exported to Japan to realize the first export of China’s autonomous driving electric vehicles. The autonomous driving vehicle will start to serve the people’s transportation as a new force. Humankind is continuously freeing themselves by creations and inventions in the course of development. Once again humankind embraces a reform of transforming the people’s traveling mode and also enters into an all-new milestone in the auto age.

These days under the grand trend of artificial intelligence, autonomous driving has become the focus of global auto industry. The auto electromotion and intelligence is the general trend and also the new opportunity for China’s automotive industry to realize “corner overtaking”. The mass production of King Long Apolong is an important achievement towards electric-driven and intelligent transformation. The strong support from Fujian Party Committee and Government’s for optimization and upgrade of auto industry is together under the guidance of the innovation-driven strategy of Fujian Motor Industry Group.

Freeing your hands, the mankind can also look up to the stars during driving. Freeing your time, everyone’s journey will become more comfortable, more relieved, and safer. The mass production and operation of King Long Apolong initiated the history of serving public transportation with autonomous driving vehicle. In the future, King Long will continue to work with partners and upstream the industry chains to focus not only on the R&D but the application of independent core technologies and drive the public transportation comprehensively into the intelligent age with scientific and technological innovations. 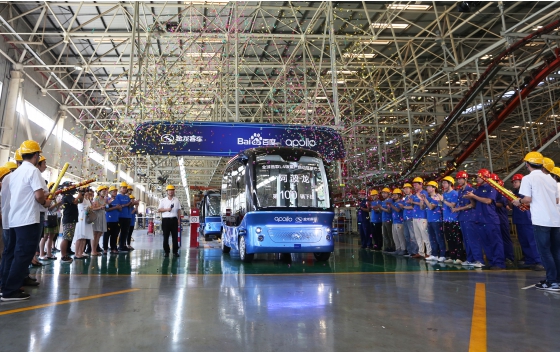